It’s not enough just to call for effort alone, as I did by urging you to respond to the coronavirus by cultivating a content marketing practice. I said:

… you don’t have to be a good writer (and you can’t be, anyway, without practicing by publishing your writing; chicken and egg). What you do have to be is effortful.

Now I’ll tell you a story about a guy who sold stuff door-to-door during the Great Depression – with great success. Though if this is a parable about effort, the effort isn’t where you might expect.

After a short-lived stint as an apprentice-chef in Paris[1], a 23-year old college dropout named David got a job selling Aga Cookers, a type of desktop oven, in Scotland, mostly in small towns. He went from town to town, household to household. Any house with a car, in fact – that was his prospecting strategy (only 1 in 12 people in the UK owned a car then).

His vision was that every single car owner in the UK should also own an Aga Cooker. By the age of 25, he became the most successful salesman in the company’s history.

His employers took notice. At their behest, young David Ogilvy wrote down what he learned – about prospecting and many other things. The result was a dazzlingly detailed, 9,000-word manifesto on how to sell[2]. It helped other salesmen replicate his success, but it also changed the way he thought about sales and marketing forever. Just glimpsing at its outline is revealing but reading through this 1935 sales manual, you will learn more about marketing than you’ll learn from any of the 50 books on the Amazon Bestsellers list in Marketing, with the notable exceptions of This Is Marketing and Influence.

64 years later, David Ogilvy died with a titan-esque net worth, considerable fame, and even a David Letterman appearance. How did he do that and what can we learn from his story?

Because our world and its economy have changed so much (because Internet), Ogilvy and his “Eureka! – Big Idea” approach is no longer a viable formula. Nor is broadcast, cold advertising a sustainable growth strategy. His meticulous and obsessive research approach, however, is still the sine qua non of sales & marketing. Not an uncommon observation.

But it was his writing efforts that crystalized his marketing and business philosophy, set him apart from his peers, and propelled him to success. That’s where the effort in this story lies.

It’s also worth it to look at Ogilvy’s actual “client work”. I find that it hews to, or at least foreshadows, the “contemporary” school of marketing thought, led by Seth Godin, which asks us to change “the culture” [of those you want to help], starting by giving them something valuable for free. By the way, this is exactly what Ogilvy did by writing his sales manual – and if you ever read Zig Zigler, you’ll see evidence that Ogilvy changed the culture of medium-ticket B2C selling.

In Ogilvy on Advertising (a must-read for anyone in any kind of business), David Ogilvy said the best ad he ever wrote was for Rolls-Royce. It was certainly one of his most successful; it helped the auto manufacturer sell a lot of quarter-million-dollar cars in a brand new market: the United States. 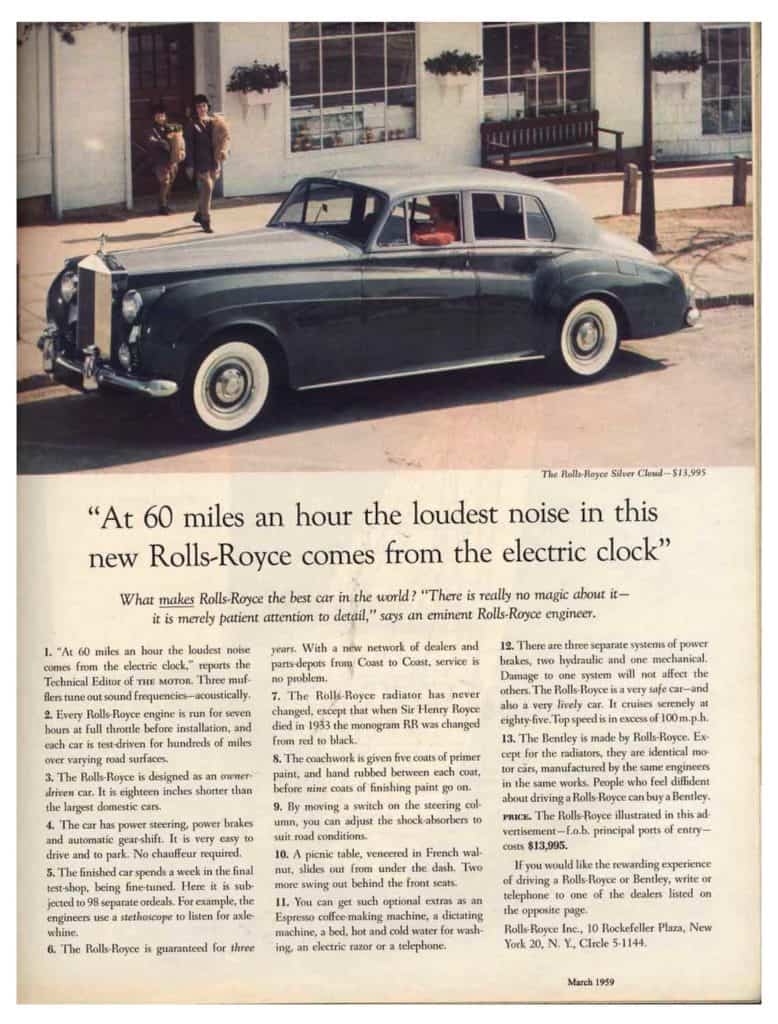 This ad is well-known among marketing bloggers but I noticed today that many, when they use this same image, crop out the details below the banner image. That’s missing the point entirely. Those 13 details are what make it work. They are truthful, pleasingly well-written, curiosity-provoking, 100% bullshit-free, and, yes, useful.

“The finished car spends a week in the final test-shop, being fine-tuned. Here it is subjected to 98 separate ordeals. For example, the engineers use a stethoscope to listen for axle-whine”

Details like this bring the object to life in the mind of the prospective buyer. They make it stick, they inspire trust.

But great effort went into acquiring those details – and a lot of listening (PDF)[3]. Ogilvy spent a week at the Rolls-Royce factory just listening to people talk. Listening, observing, and finally, compressing what he learned into a specific and useful advertisement.

He created a fact-sheet, just as a modern digital marketer might do in creating a lead magnet. Who cares if the fact sheet was distributed as an advertisement The medium is not the point.

And you don’t need to use advertising to replicate that type of effort in your marketing, but you do need to research by listening and seeing. Then you need to write about it – or if you are less ambitious, at least commission someone else to do so.

Because if you don’t write about what you’ve listened to, you haven’t listened deeply enough.

It’s the same with drawing and painting – only through attempting to replicate what you think you see do you actually begin to see.

Take action. In 1935, David Ogilvy cataloged 26 objections to the Aga Cooker. Your turn to ideate – what 26 objections do your customers have to your products and services?

Write it down and let me see what you got – even if you come up short of 26!

Thanks for listening,
Rowan