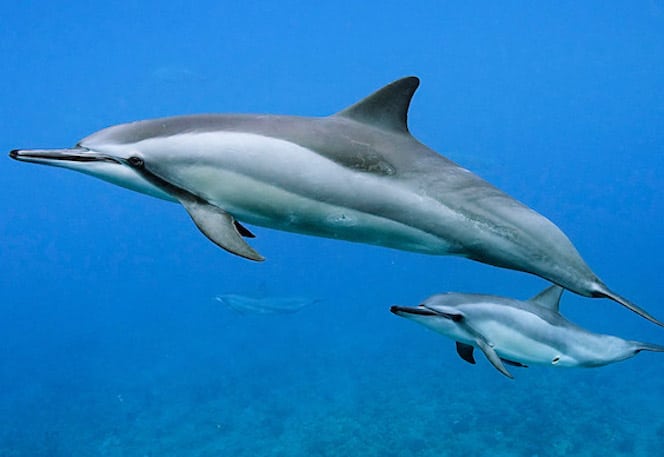 Once in the Pacific ocean, about 200 meters west of the “town” of Puako, Hawaii, I found myself about 3 meters from a wild creature – a baby dolphin, suddenly swimming alongside me.

I’d been enveloped by a Hawaii dolphin pod making their evening migration clockwise up the western, Kohala coast.

The dolphin baby was tiny and round, almost the shape of a rugby ball. And it seemed curious. What is this strange pink fish and why does it swim so slowly – is it trying to make me laugh? But in a flash, two adult dolphins flanked the baby. They seemed to look at me – out of their left eyes. Not threateningly, but more alertly that I’d been accustomed when swimming with them previously.

Fast forward a decade or so later and I come across a research study, “Visual laterality in dolphins: the importance of the familiarity of stimuli” [1] which reported that the following observation:

Which is to say, our dolphin cousins take in familiar information through the right hemisphere of their brain and novel information through their brain’s left hemisphere. This is significant partly because unlike human, dolphins brain hemispheres are much more distinct from one another than ours our, due to less developed corpus colossus, which is sort of the bridge connecting the two sides of the brain. Some say we abuse that bridge.

The left hemisphere receives visual information exclusively from the right eye and the right hemisphere from the left eye. Moreover, stronger isolation of brain hemispheres is due to relatively less developed corpus callosum [18].

If this theory is true, it shouldn’t be surprising that I was examined through the left eye and right brain of our one-time land mammal cousins; deep ocean snorkelers must be something these dolphins have seen hundreds if not thousands of times in their lives.

But had I been the first human they’d seen, perhaps they would have let the left brain process me.

Hemispheric lateralization has become a cloudy subject. Every day new studies are published which contradict others. A quick search on Google Scholar reveals that 104,000 peer-reviewed scientific research studies have been conducted on the subject. I’m not a scientist and I certainly haven’t read 104,000 of anything.

So let’s go back to the beginning at least – the 1960s-era research of  Nobel Prize winner Richard Sperry. To make a long story short, Sperry audaciously severed the brain’s “bridge”, the corpus callosus – with many people – and afterward found that each hemisphere continued to function. Based on that premise, researchers raced to ascribe personalities to the two sides of the brain. In broad strokes, here is conventional wisdom:

Yes, this premise has been refuted – and re-refuted (I mean, what did you expect when there are 104,000 scholarly research studies on hemispheric lateralization and counting?).

Yet the premise that the right brain creative (or more creative, at least) seems to have withstood the test of time. Daniel Pink wrote a whole book about: Why Right Brainers Will Rule the Future. And other books piggybacked on that one, such as Thought Revolution, by William Donius, where innovation-consulting Donius discusses his work with the left hand. He has held workshops where ideation is based on writing things on paper with the “left” hand.

In fact, he actually advises the use of the non-dominant hand, be it left or right. But the point is the same one made my dolphin researchers: new information – and new ideas – is to be absorbed with the creative part of our minds.

I’m not suggesting you ideate your new positioning using your non-dominant hand. But it’s important to take in new information. Dolphins know this because the migrate – daily. And things change daily. Increasingly, it’s the same for us. So what new information do you take in daily, and how does that impact your marketing.

Take action. Find a daily newsletter in one of the following areas: psychology, art, economics, finance, medicine. Or more niche – AI, Data Science, public speaking, business news in Subsaharan Africa. As long as it’s (a) something new and (b) something related to your work – but different. And just glance at it every day.

Reply to this email to let me know what you chose!

Have a good day,
Rowan