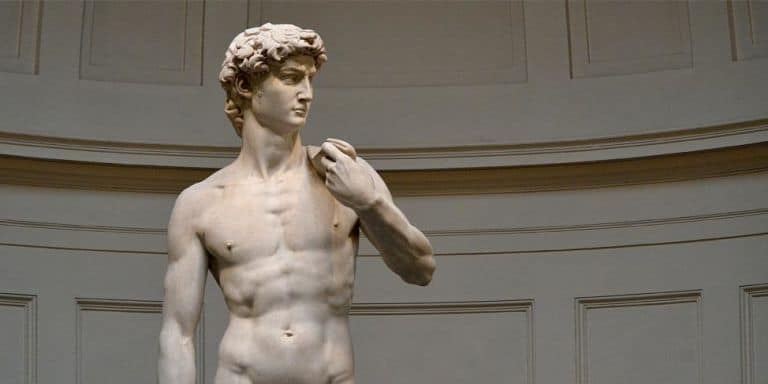 Michelangelo’s statue of David is not the real David

Let’s think about that for a moment. Who was the real David? Who created him? And was he copied by Michelangelo to create his famous statue – or was there more to it than that?

You may be in a hurry, so I’ll sum up this entire post in one sentence: the works of others provide us a source of ideas, but to make them ours, we have to transform them (not just copy them) into something new.

But I make some other points in this article: copying is good for learning but bad for business, all new ideas are combinations of old elements, and are created by pattern-matching. And don’t take experts too literally; they may be indulging in irony.

I also make an assumption: ideation, the creation of “new” ideas, is a vital concept in marketing, branding, strategy, and business. I haven’t defended that premise (that’s why it’s an assumption) so if I am wrong there, please let me know.

Anyway, now on to the part of where I go off on tangent after tangent. Thank you for indulging me.

Here’s what prompted this post: I was hit with an onslaught of content on LinkedIn this last week on the subject of originality vs copying vs plagiarism in creative work, including marketing. For example, this video entitled: “I Stole This Video Idea”.

I’m writing this to clarify how I feel about this subject for myself, but if you follow marketing talk, you have probably run into this idea: copying or stealing ideas = acceptable.

Now I don’t mean to a boring nitpick, and I’m not insensitive to the fact that both copy and steal are being used sort-of-ironically, but technically speaking, copying and stealing are Very Bad Things To Do.

A man may seye full trooth in game and pley

To be honest, the “copy others’ ideas” theme is not new to me, because I’ve been reading marketing advice and opinion for many years. And before that, I studied creative writing which is littered with the tongue-in-cheek advise: copy great writers, steal their ideas, borrow their conventions.

Copying is good for learning

Sometimes the intention of copying is learning, improving your abilities. The idea is that by literally copying well-written material, you will improve your writing style and deepen your understanding in a way that’s not possible from merely reading.

And Hunter S Thompson reputedly hand-typed the entirety of The Great Gatsby, in a perverse twist on the writerly hand-copying tradition.

It’s no different in painting; for centuries painters create exact copies of the best works of accomplished painters whose styles they want to absorb and that is a practice in studio art to this day. I myself copied the charcoal drawings of John Singer Sargent, but they were so bad I think I gave my drawing teacher a heart attack.

Anyway, this is a great learning technique. But what do you suppose would happen to the writer who presented another’s work as his own though? What would happen to a magazine which published the exact same article as last week but with a different writer’s name?

If they kept doing it, the readers would unsubscribe, they’d go out of business.

Copying is bad for business

And that’s the fundamental problem I have as a marketing consultant with copying. I believe every one of my clients is capable of describing the value of their products and services to their customers. I believe they should learn from others, great and not so great.

Your core messages, your “reason why”, your positioning, and the expression of those things with your voice, your twist – each of you who wants to create new and fruitful relationships with your customers is capable of expressing those things in an advantageous way.

But you’ll never get there by copying, let alone stealing.

So when someone tells you to “copy”, take that with a grain of salt. It may be a great creative talent, like Drayton Bird, speaking tongue in cheek. The problem happens when amateur marketers parrot people like Drayton Bird or David Ogilvy without understanding the subtext. (LinkedIn/SociaMedia-sphere, I’m pointing my finger at you.)

Bird and Ogilvy know better than anyone that you’re not actually copying, you’re deriving inspiration. And you’re doing so by seeing connections.

In fact, it was Drayton Bird who recommended to remarkable book by James Webb Young called A Technique for Producing Ideas, which I wrote about a couple of years ago.  As Young put it:

With regard to the general principles which underlie the productions of ideas, it seems to me that there are two which are important.

The first of these has already been touched upon in the quotation from Pareto: namely, that an idea is nothing more nor less than a new combination of old elements.

That is, perhaps the most important fact in connection with the production of ideas. However, I want to leave the elaboration of it until we come to a discussion of method.

Then we can see the importance of this fact more clearly, through the application of it.

The second important principle involved is that the capacity to bring old elements into new combinations, depends largely on the ability to see relationships.

So what’s the outcome of this process of seeing relationships, of pattern-matching? Here’s one way to think of it: transformation.

Why were alchemists so sought after in the Middle Ages? Reason: they apparently turned lead to gold. But forget about alchemists; the art of transforming lies not in magic but in the process Young articulates: seeing relationships between old elements: pattern matching, a concept which David C Baker expounds on in his 2017 book, The Business of Expertise.

It’s the Art of Transforming Things

Ironically, that sentiment has been copied dozens of times in the media in the decades since he said it.

Now, why is that idea so enduring? Is that a trick or a joke? No, not at all, because in order to reconcile two sources with one another, you have to make a judgment as to their relative merits. You have to make them fit into a coherent understanding of the subject of your research.

In other words, you have to transform them.

And when you do, you’ll have something new, different, maybe even interesting.

Or maybe not but at least you won’t have someone else’s idea. At least you’ll have something different. And that’s extremely important because, to put it crudely, the business value of your services is directly related to how different they are, or seem to be, from your competition.

If we steal thoughts from the moderns, it will be cried down as plagiarism; if from the ancients, it will cried up as erudition.

Right; that’s because it is erudition, Reverend.

And what better application of erudition than to consider an idea created thousands of years ago, in some extinct language, in the context of your modern day life?

David Ogilvy famously quotes Cicero in the opening to Ogilvy on Advertising, to re-make the point made by Cicero centuries ago: that messaging has to inspire action without relying solely on logic, but by appealing to emotion as well.

Does that make Ogilvy a copy-cat? Of course not; the mere act of applying ancient wisdom to the modern day is by itself a form of transformation.

Fortunately, there’s one writer (and brilliant marketer) who understands and deftly articulates the complex relationship, similarity, and difference, between copying and creating:

It’s the art of transforming things.

It’s tricky, you have to have the right touch and integrity or you could end up with something stupid.

Michelangelo’s statue of David is not the real David.