Whatever it is, I think the greatest advertisement of all time:

In other words, it depends.

For me, for example, I will never forget the 7-Up commercials that ran on TV during my 1980’s childhood. In one, it was the dead of summer and so hot and so dry, you couldn’t even walk across the street. If you did, dust clouds rose up in your wake, clinging to your sweaty back. Might as well just sit in the shade. Crops were failing, farmers were dejected, and no one moved an inch.

Then there was one drop of rain.

Then another, and another. Oh lord, what is happening?

Soon there was a downpour! Everyone lept for joy and danced in the streets with relief. Feels so good coming down. Even at ten, I know this was a gimmicky, manipulative tagline, but I didn’t care; I liked the story that was told. I often replicated the scenario using sprinkler technology.

Oh, speaking of plot mechanics, what caused that rain to come down? A farmer sitting down in a chair and cracking open a cold 7-Up!

So it worked. But nowadays… nowadays? I have no use for that advertisement or anything like it. It’s not the right way to communicate with me.

On the other hand, I can think of an ad that never gets old. Apple’s Think Different television ad.

Here’s to the crazy ones, the misfits, the rebels, the troublemakers…

That’s why this is such a hard question to answer.

But it’s still an interesting question. So while re-reading Ogilvy on Advertising (Ogilvy, 1980), I thought I’d try to see how he’d answer the question. Of course, wise people like David Ogilvy avoid making superlative statements, so he names no “greatest of all time”.

For example, one of his own favorites was the Dove ad of a woman in a bath, on the phone, saying, “Darling, I’m having the most wonderful experience.”

By the way, this was part of his long-term marketing strategy for Dove, which established the product not just as a soap but as a skin moisturizer, in a move that prefigured the explosion of skin care products that humankind is currently so blessed to experience.

Apparently, he’d found through research that “a psychologist had tested 100s of words for their emotional impact, and ‘darling’ had come out on top”.

Just a footnote on the headline’s ellipsis. The ellipsis has become a common convention in Internet-enabled communication. In fact, it became so common in the advent of mobile messaging, in particular,  that Internet-sociologists like Clay Shirky, Maggie Jackson, and Nicholas Carr saw fit to weigh in on the ellipses’ raison d’etre.

If could I synthesize their findings, they think the ellipsis indicates a pause in the conversational flow. A shifting of the foot, a deep breath, a pulling-the-hands-out-pockets to gesticulate or emphasize an idea. An opportunity for you to respond with share your perspective.

How telling then that many decades before the Internet, let alone smartphones, chat, and messaging, David Ogilvy used an ellipsis, to create a conversational effect, in one of his best advertisements. By the way, her side of the conversation continues in the bottom half of the advertisement.

Are interesting details the key to a good conversation?

Another of his own favorites (which was also very successful) had the headline: “At 60 miles an hour the loudest noise in this new Rolls-Royce comes from the electric clock.”

The top half of an ad that David Ogilvy said was the best he wrote. The ad was based on intensive research and detail.

But what was so great about that ad was all the straightforward detail, which he learned from interviewing factory engineers. In fact, the lower part of the add is nothing but a series of details.

Have you ever found yourself reading a list of details in spite of yourself – perhaps from a magazine at the dentist office lobby when your phone is out of power? I had that experience looking over the ad, even though I find it difficult to relate the product. I’m not really a car-person, let a Rolls-Royce enthusiast. (If it gets me from point A to point B, my reaction is “what a great car!”) But I read all thirteen details that Ogilvy wrote about the 1962 Rolls-Royce.

But based on my careful read of Ogilvy on Advertising, he reserves the highest praise not for his own work, but for an ad written by his counterpart and competitor at Young & Rubicam, one of the largest advertising companies of the 20th Century, along with Ogilvy & Mather.

The Greatest Advertisement for a B2B Services Agency

If you’re more interested in B2B marketing, you might like to know that Ogilvy said that the best ad ever run “by an agency” (ie agency soliciting work from businesses) was the one you see below.

It ran in Fortune magazine in 1930, and was written by Raymond Rubicam himself: 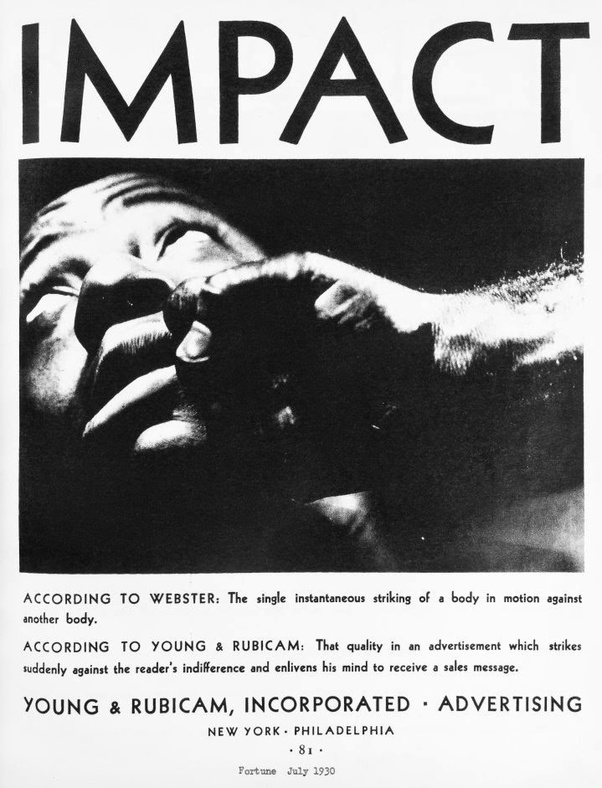 Raymond & Rubicam ran ads in Fortune for 40 years; Ogilvy singled this one out for praise

This ad was created in the pre-Raging Bull era of the 1970’s when media capitalized on the powerful imagery provided by high-quality boxing photography. Thus, this ad had an impact on its Forbes magazine readers in 1930.

But it’s the copy that is so remarkable. Firstly, it sets Rubicam & Young up as the ultimate authority, on par with Webster’s, on the concept of impact in advertising. How can you be a thought leader if you are not the authority on a word that’s a big part of your business?

In doing so, it presents prospective clients with a very compelling offer, IMPACT:

That quality in an advertisement which strikes suddenly against the reader’s indifference and enlivens his mind to receive a sales message.